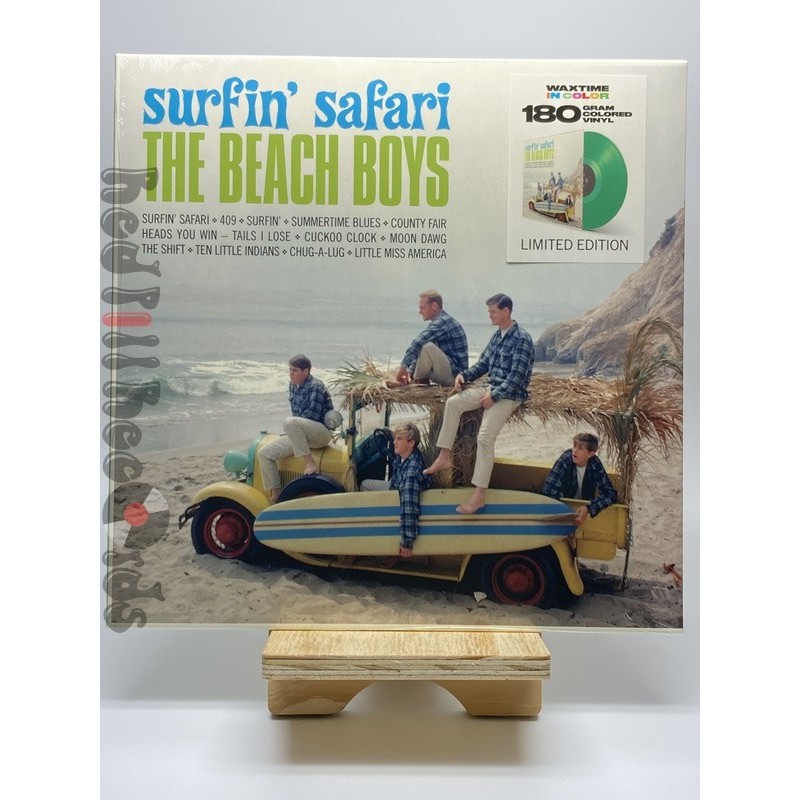 This WaxTime in Colour (this LP has been pressed on green vinyl) release presents the original mono version of the album. As a bonus, this LP includes The Beach Boys’ first B-side, ‘Luau’, which was originally produced by Hite Morgan and released on the small Candix label.
Original Liner Notes:
Last year when a group of sun-tanned youngsters recorded a song about their favourite sport, they had no idea the tune was destined to ride a wave of popularity that would rival that of the sport itself. But just like the hair-raising seaside pastime for which it is named, the song ‘Surfin’’ became an overnight sensation, and the surprised teenagers who had sung it suddenly found themselves on their way to fame and fortune. Then they did a sequel called ‘Surfin’ Safari’, and the immediate success of the track left no doubt that The Beach Boys had arrived.
The group is mainly comprised of people from Hawthorne, California, named Wilson… there’s Brian, Dennis, Carl, and their dad, Murray Wilson, a long-time songwriter who acts as manager for the outfit. Then there’s the boys’ talented cousin, Mike Love, the composer of ‘Surfin’’, who sings both the lead tenor and deep bass parts in their usual vocal arrangements. The remaining member of The Beach Boys is young David Marks, a neighbour of the Wilsons who plays a driving rhythm guitar.
Brian, the oldest of the Wilson boys, is the group’s leader and vocal arranger. Carl is the very accomplished lead guitarist, while brother Dennis sings and plays the drums. None of them, incidentally, had any formal training, but they all grew up in an atmosphere where music was a regular part of their lives. Every one of the boys possesses tremendous natural ability, and each has a fair singing voice as well.
Here, then, in their debut album on Capitol, are the rockin’, rollin’ kids who have made the biggest splash along the Pacific shores since the sport of surfing was discovered… The dynamic Beach Boys!
- unsigned