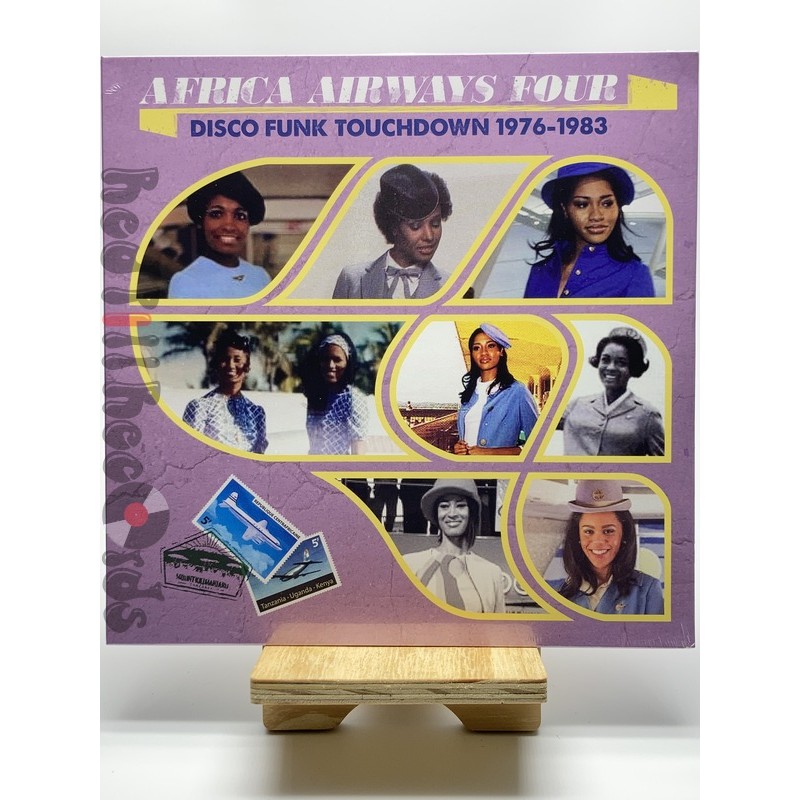 It's just over 3 years since we launched the Africa Seven label in Paris and London. Our first release back then (Airways One) is still our best seller and had to be repressed 4 times so far. Forty or so releases later it is time to take to the clouds again. Being the unimaginative bunch we are, the fourth installment of our African sky filled musical cornucopia is called African Airways Four (Disco Funk Touchdown - 1976 - 1983). This time around all tunes have the Disco flavour. As ever it's all about the music... the skies are wide and funky and the air is filled with musical goodness. Your flight is about to leave. Your flight opens with a punchy disco funk assault from Paris based Cameroonian Tala AM. Here with his drive bass and guitar funk riff 1981 stomper "Get Up Tchmassi". Next up and staying with the Cameroonian connection is Eko with "Bowaa Mba Ngebe". The lyrics talk of accomplishing the things in life for your family and yourself. The sweeping strings and gloriously uplifting music matching the sentiments of the words perfectly. Uta Bella began singing in the 60's and by the time disco hit in the 70's she was already established a singer in her native Cameroon, here the locked on groove of "Nassa Nassa" is a perfect snapshot of the sound and the African disco times. Charly Kingson (cousin of Manu Dibango) is next with his "Nimele Bolo". Recorded in Germany with the cream of Munich's session musicians the bass synth is out in force on this one. Punchy brass, rock solid grooves and jazzy Rhodes add all the right ingredients for a fine disco synth excursion. Next is the musical heavyweight from Cameroon cousin Manu with his 1978 Disco, jazz funk masterpiece "Sun Explosion". Side two opens with a blast of Elvis Kemayo and his piano and guitar funk bomb "Biram". Next Momo Joseph gives us "Africain". Best known in France as an actor, this disco funk groover was released on his self pressed LP "War For Ground" in 1983. A true gem indeed. Nigerian, ex Funkees member Jake Sollo is next with "Tinni Yanana". Recorded in the UK in 83 its slick and smooth with a hint of "at the car wash" groove. Pierre Didy Tchakounte follows on with his soul funk 'golden years' style groover "Soul Magabe". Produced by one of our favourite Parisian producers Slim Pezin. We close off our journey with the tribal chant disco-funk special from the Monstars "Funny Saga". Ladies and Gentleman, we have landed at your destination, please remain seated until the aircraft has reached the terminal. We look forward to welcoming you aboard Africa Airways again soon.
Various Artists
ASVN040
5055373534855
2 Items